On July 31st Russian tanker Christophe de Margerie with 75.656 tons of liquified natural gas onboard finished transit from Hammerfest in Norway to Boryeong in South Korea through northern Arctic sea route. The journey was made in a record time of just 19 days without any aid of specialized ice-breaking vessels for the first time.

This historical breakthrough is not only significant for all future Arctic voyages but also for BlueTraker product line of EMA Group. As a globally renowned manufacturer of satellite terminals for communication, tracking, and monitoring of vessels and fleets, we are immensely proud to be a part of this important story. Namely, the super modern SCF (Sovcomflot) tanker made its maiden voyage equipped with our BlueTraker® LRIT Arctic terminal, provided earlier this year. LRIT stands for Long Range Identification and Tracking.

The BlueTraker® LRIT Arctic is the world’s only LRIT terminal which enables operation in the extreme environments of Arctic and Antartic seas, the so called Sea Area A4. Pole to pole coverage is provided through Iridium satellite network. The terminal resists extreme weather conditions with built-in heating elements. Due to the unique double-shell housing, the BlueTraker® LRIT Arctic terminal can operate in extremely cold environments with temperatures down to -50° C. 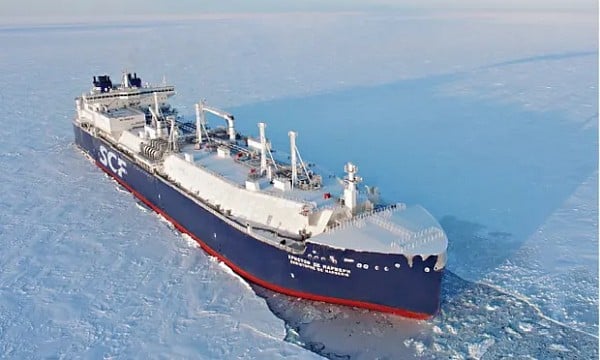 According to SCF, the shipping company which owns the tanker, the northern Arctic route is about 30 percent shorter than the conventional southern shipping route through the Suez Canal. Built to traverse the frozen waters of the Arctic, it took 299 meters long tanker just six and a half days to pass along the northern sea section of the route in the Russian Arctic, cutting through 2.1 meters thick ice on its way.

Fewer than 500 ships have made the journey until now, but SCF said it expected the journey to become a routine. Christophe de Margerie is the first of 15 such tankers expected to be built and extends the navigation window for the northern sea route from four months with an expensive icebreaker to all year round.

BlueTraker® LRIT Arctic is a member of an Arctic range of products which consists of VMS Arctic, LRIT Arctic and SSAS Arctic terminals designed specifically for operation in the Polar regions. Global demand for these terminals is increasing in the last years. Our Arctic product range features provide all needed functionalities demanded by the customers.

You can find out more about which cookies we are using or switch them off in cookie settings.

This website uses cookies so that we can provide you with the best user experience possible. Cookie information is stored in your browser and performs functions such as recognising you when you return to our website and helping our team to understand which sections of the website you find most interesting and useful.

Strictly Necessary Cookie should be enabled at all times so that we can save your preferences for cookie settings.

If you disable this cookie, we will not be able to save your preferences. This means that every time you visit this website you will need to enable or disable cookies again.

We use Google products such as: Google Analytics and Google Search Console. We use these products to understand how the site is used to improve the user experience. All user data is anonymous. The types of data collected include: IP address, information generated by the browser, e.g. browser type, operating system, access date and time, how long the person is viewing the site, what they are viewing, etc. Click here to review Google's privacy policies.

Please enable Strictly Necessary Cookies first so that we can save your preferences!

You can read more information about the protection of personal data here.